Enthusiast 7 includes known exoplanets in 3D, with proper size, orbit and planetary textures! You can visit and land of the surface of every single one. See an extra-solar sunset from the surface of Kepler-62e!

Starry Night Enthusiast 7 - the world's most realistic astronomy software - now includes over 100 interactive multimedia tours, a dynamic user interface and the all-new Universal Search function, making it easier than ever to explore the universe.

If you own an earlier version of Starry Night upgrade for a discount!

The first attempt at a manned lunar landing took place in July 1969. Astronauts Neil Armstrong, Edwin "Buzz" Aldrin, and Michael Collins would repeat the Apollo 10 mission. But when the Lunar Module reached the point 50,000 feet above the lunar surface, the descent engine would be fired for twelve minutes and the crew would attempt to land on the moon.

Image: Apollo 11 Looking Back at Earth

Armstrong and Aldrin spent 2.5 hours outside the Lunar Module, collecting 21.5 kg (47.5 lbs) of lunar samples. They erected an American flag, received a call of congratulations from President Nixon, and inspected their Lunar Module, Eagle.

Link Celebrating 45 years since the first landing on the Moon on July 20th, 1969!

The lunar trajectories of the nine Apollo missions, which flew to the Moon and back during the 1960's and 1970's, were calculated by analyzing official archived NASA data. By leveraging the sophisticated technology that powers all Starry Night software, Starry Night Apollo allows space enthusiasts to view the moon and celestial objects just as they appeared decades ago - emulating the Apollo crew's actual space travel experience.

"The historic Apollo missions are an indelible part of the American experience and psyche," said Seth Meyers, COO of Simulation Curriculum Corp. "Generations remember Neil Armstrong's 'one small step for man,' and with Starry Night Apollo, millions of space enthusiasts are able to vicariously experience these important space missions with precise, true-to-life simulations."

This changed in the early 1990s, when astronomers began to discover the first extrasolar planets, worlds orbiting other stars.

Since the first discovery, astronomers have found approximately 1800 extrasolar planets. Astronomers now believe that planetary systems are plentiful throughout the universe.

Starry Night makes it easy to locate the position of the Sun, and over 5 million other space objects—including all the planets and their moons, comets, asteroids, satellites, Messier objects, the complete NGC-IC catalog, and more.

If you are interested in a specific target such as a planet, a constellation, or a bright new comet, all you have to do is type its name into the Universal Search field..

The all new Enthusiast 7 user interface has been carefully re-designed to optimize your software experience. The dynamic UI allows faster access to all your files, features & databases, while also providing the ability to easily hide-away the menu system for a deeply rich, and transparent, planetarium experience.

Most stars appear white, but look closely and you'll notice that some do have a color, often a slight blue or orange hue.

Star colors are not very saturated, and since the human eye is not particularly sensitive to colors in low-light conditions, the colors are subtle.

A reflecting telescope can enhance the colors, but we wary of inexpensive models that can refract light in such a way that the stars exhibit false colors. Red stars—like Antares, Aldebaran, and Betelgeuse—are cool.

Bright red stars (which actually look orange or even yellow) are red giants or supergiants—hugely swollen stars with bloated atmospheres.

They can be so large that, were one placed at the center of our solar system, Mars would orbit beneath its surface!

In Enthusiast 7, every star is now accurately rendered as a 3D body with classification-appropriate color, texture and relative radii.

Link The SkyGuide pane is a link to dozens of interactive multimedia tours that explore the fascinating science and history of the solar system, the stars, the galaxies, the beginning of time, and the fate of the universe. SkyGuide works just like a web browser; click on the links to take a tour.

Over one hundred interactive multimedia tours await you in the SkyGuide pane. These in-depth experiences reveal the fascinating science and history of the solar system, the stars, the galaxies, the beginning of time, and the fate of the universe.

As you and SkyGuide explore together, you will learn tips for navigating the sky, fun facts of the solar system, seasonal tours of the sky, and much, much more. Throughout this multimedia matrix you’ll discover images and movies to enhance the experience.

Our solar system • The Zodiacal Light • The Sun • The sunspot cycle • Solar eclipses • Auroras and solar storms • Mysteries of the Sun • The Earth • Artificial satellites • Space Missions • Meteor showers • The Moon • The phases of the Moon • Lunar eclipses • Full Moon names • Top ten Moon facts • The day the Moon was made • The Apollo Missions • The Planets • Planetary motions • The moons of planets • The Asteroids • The comets • The stars • Planets around other stars • Shape-shifting constellations • Our Galaxy • Nebulae • Novas and supernovas • Neutron stars and black holes • Other galaxies • Giant Leaps • and more.

Link New and updating space missions with 30 new detailed and accurate 3D models of spacecraft and their trajectories.

Enthusiast 7 lets you join in with both manned and unmanned space missions.

Hover above Earth in the International Space Station.

Hitch a ride with the Cassini and Huygens project to study Saturn and land on its moon, Titan!

Join the Galileo spacecraft as it the observes a comet colliding with Jupiter.

Enthusiast 7 includes new and updating space missions, with 30 new detailed and accurate 3D models of spacecraft and their trajectories.

Watch a cinematic journey through the cosmos in High Definition, showcasing the incredibly rich and detailed Starry Night software OpenGL graphics that have set the industry standard for excellence in astronomy software.

If you enjoy the video please share it with others!

+ View The Sky From Anywhere

View The Sky From Anywhere

Link Take a trip, faster than the speed of light, from the farthest frontiers on the known Universe, flying through thousands of galaxies, across the MilkyWay, into our solar system, and finally, at home, on planet Earth.

Starry Night can show you the sky from your own backyard or from any other location on Earth. But that’s only the beginning. You can lift off and travel to many thousands of places within our galaxy, or instantly jump to any one of them.

Visit hard-to-reach spots like the North Pole. Or cruise the solar system on the lookout for fascinating vantage points. It’s easy to change your location.

Start by selecting from a list of over 8000 real places in the universe. If your chosen spot is not on the list, you can always add a new one.

And, just as you changed your viewing location on Earth, you can also view the cosmos from anywhere in space!

Go to the Moon and witness a total eclipse from one of the Apollo landing sites. Watch the sunset from the surface of Mars or one of the newly discovered exoplanets.

Or even ride a comet as it makes its long trek around the Sun.

You are limited only by your curiosity!

Link An H-R diagram tells you about a star’s age and its mass. Each dot on the diagram represents a star.

An H-R diagram tells you about a star’s age and its mass. Each dot on the diagram represents a star. The diagram plots star luminosity (the amount of light and energy emitted by the star) on the vertical axis against star temperature on the horizontal axis.

The stars plotted in the H-R diagram are the same stars currently onscreen.

You can click on any star in the H-R diagram, and Starry Night will identify this star on the screen. This makes it easy to identify stellar oddballs, such as white dwarfs, supergiants, and extremely massive main-sequence stars.

Conversely, you can point the cursor at any star in the main window, and Starry Night will highlight the star’s position with a red dot on the H-R diagram. The H-R diagram is fully dynamic. If you scroll around the screen or change your field of view, the stars shown onscreen will change, and the H-R diagram will update to plot these new stars.

See how the sky will look tonight or tomorrow, or even far into the past or future. Perhaps that’s what the locals were trying to do at Stonehenge. You can also journey thousands of years into the future and sneak a peak at solar eclipses, lunar eclipses, and other celestial events long before they happen.

Starry Night not only places you somewhere in time, it also lets you control the flow of events.

You can speed up the rotation of the Earth, change the pace of planetary motion through the constellations, or rewind history and watch a solar eclipse as often as you’d like, perhaps changing your viewpoint a little each time. With Starry Night, you are not stuck in the here and now.

Of course, you can also journey thousands of years into the future and sneak a peak at solar eclipses, lunar eclipses, and other celestial events long before they happen.

We know that both the universe and our understanding of it will change in the future. New moons will be discovered. Bright new comets will streak around the Sun (and many won’t survive). New satellites will be launched into orbit. New planets will be found around other stars.

Life may even be discovered somewhere beyond Earth. And to ensure that you always have the most current view, we’ve designed Starry Night so that it can automatically update its vast library of information over the Internet.

But since the databases of comets, asteroids, and satellites can change more frequently than other databases, Starry Night also lets you manually download the latest versions. 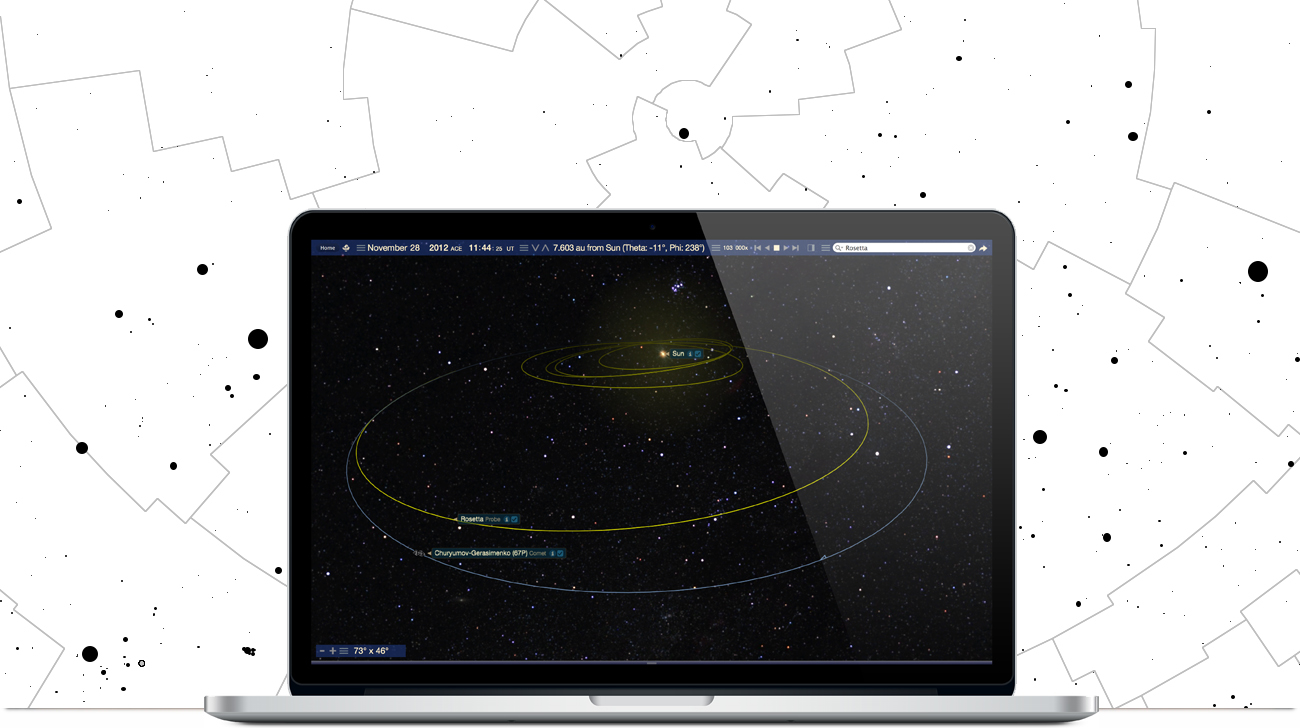 Not everyone will be an astronaut.
But we can all go to the Moon.